Conditions for the 2018 Commonwealth Games men's marathon were far from optimal with temperatures reaching 29oC and humidity levels up to 74%, so clearly pacing and a good sense of individual thermoregulatory effectiveness were going to be key for all competitors.

Callum Hawkins led the field from an early point in the race (see chart below) breaking away from the other front runners at around 25km and, as is clear from the final result, his pace was too fast for the conditions. In effect he was pacing for a 40km race rather than the full 42km, as evidenced by his collapse with 2km to go. There were no doubt multiple physiological changes that caused the collapse (multifactorial fatugue) but the underlying issue will have been inadequate thermoregulation.

Callum's sweating efficiency was insufficient to cope with rise in core body temperature resulting from Callum's increased workload. There will have been a number of knock-on effects - reduced blood volume and elevated blood viscosity leading to increased heart rate, a loss of key electrolytes leading to reduced muscle efficiency, and eventually, as these effects continue, a reduction in sweat rate which will clearly lead to a further increase in core body temperature. Ultimately central fatigue sets in and the central nervous system will prioritise survival over performance, reducing blood flow to the muscles. At this point Callum would have experienced disorientation, a reduction in mental accuity and decision making ability and finally, physical collapse. 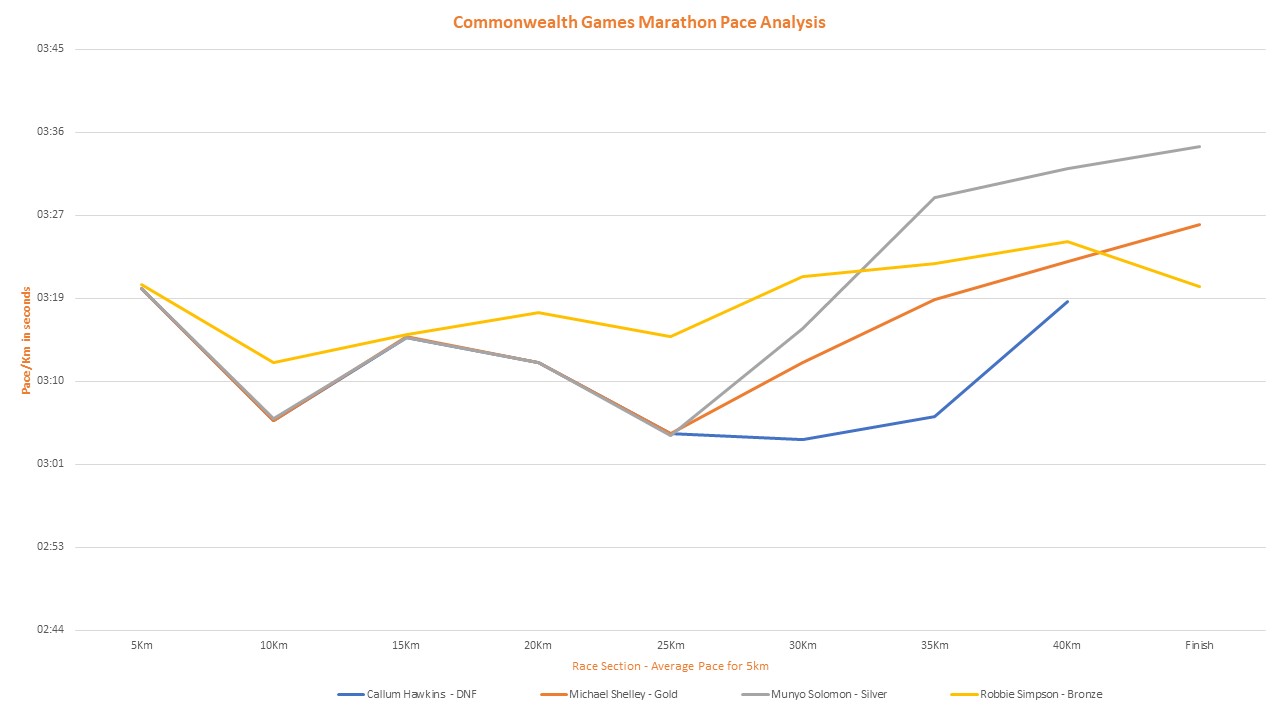 So what are the implications for dealing with this situation? In the very short term the only solution is to reduce race pace in order to help maintain a stable core body temperature. From the chart we can see that the winning runners reduced their pace at the 25km mark, enabling them to successfully complete the full 42km distance. Medium to long term a greater focus on measuring thermoregulatory efficiency is recommended. Train warm and perform cool (or as cool as conditions permit...) is the mantra. Even 2 weeks of monitored acclimation training will have a real impact, and even in the absence of professional facilities, including environmental chambers, simple techniques including wearing additional layers of clothing, and longer, low intensity training sessions, will help.

Using Kudu as a predictor for weight loss via sweat

In a number of sports athletes compete in weight categories. Most of these sports are martial arts, where it is considered unfair for a bigger (and heavier) athlete to fight a smaller (and lighter) athlete.

On one hand this system opens top-level competition to athletes that would otherwise be too small to compete, but on the other hand it means athletes face the issue of “cutting weight”. The advantage obviously goes to the heavier athlete, meaning it is beneficial to compete at the top end of each weight category. This leads to a situation where athletes who are significantly heavier than they compete at, will drop lots of weight the run up to an event. Cutting weight is done differently in each sport, but usually includes sweating large volumes the day before an event, often by simply exercising wearing lots of layers! While this practice is within the rules, it can be dangerous to the athletes if they are undertaking extreme weight loss, or simply be detrimental to performance because:

This is where Kudu comes in to save the day.

With regular use of the Kudu we have been able to build up a “sweat profile” of our athletes, showing how that athletes sweat response acts. When this data is combined with weight loss during a training session, we can see how much exercise causes a given weight loss. This means that during the process of making weight, athletes can make informed decisions about how much exercise is needed to cut a certain amount of weight. It also removes the mental stress of worrying, and having to make decisions when they should be focused on the upcoming competition.

In the future this could be incorporated into the Kudu app. Athletes can log into their account and input the weight they need to cut, then exercise while wearing the Kudu and the app will notify them when they’ve sweated enough. This means that athletes can have significantly more detailed information during the cutting weight process.

So, let me tell you about how we’re working with a team of lightweight rowers and are planning to improve their weight cutting practice. The rules for lightweight rowing state that the maximun average weight for a female crew is 57kg (with no individual over 59kg), and the maximum average weight for male crews in 70kg (with no individual over 72.5kg).

The fact that any individual athlete can be up to 2.5kg over the average crew weight gives rowing a unique weight cutting element. Imagine a situation where every athlete in an 8 person crew weighs in at 70.5kg. They’d have to lose 4kg between them, but that weight loss can come from any of the rowers. By comparing each athlete’s sweat profile, which tells us how fast and strong their sweat response is, the Kudu team can advise how this 4kg should be cut. Rather than asking each rower to cut 0.5kg, which may be a considerable challenge for some of the athletes, we could take the 4 rowers with the strongest sweat response and tell them to cut 1kg each, which wouldn’t be too much of a challenge for the 4 best sweaters.

By working as a team, with each member playing to their strengths, the crew are able to cut the weight, and perform at their best.

The benefits of data in sport

As the most recent addition to the Crossbridge Scientific team I’ve been learning quickly what we’re all about. The aim of the company is ‘to put the “science” into sports science’, which, as a sports science student is obviously a mantra I’m on board with. The world of sport has got increasingly scientific in recent decades, with significant steps forwards in areas such as nutrition, psychology and of course Crossbridge’s area of fitness measurement.

For me personally the innovation here at Crossbridge is particularly interesting because it ties in so well with my time as an endurance runner. In September 2016 I ran the Oslo marathon in 2:42, cutting a massive 21 minutes of my previous pb. I achieved this through a significant change to the way I trained and recorded my running. I moved towards running lots of “hot and slow” miles, and recorded as much data as possible. I could discuss for hours the benefits how I trained but I’m instead going to tell you why recording as much data as I could was a great choice. Courtesy of Dr Schwiening, part of the Crossbridge team, I was provided with a spreadsheet into which I input the time, distance and average heart rate for all my training runs. From this information I was then presented with a range of graphs, charts and numbers, each showing me something new. One of the most useful graphs was the distance vs intensity graph. Which, by the end of summer 2016, looked like this:

Here the red line is a measure of the intensity of my training, and the blue line shows how far I’m running each week. This graph is cleverly used to avoid injury. Training at an intensity that’s too high is a huge source of injury for runners, but by plotting this graph I was able to check I wasn’t training too hard and therefore avoid injury. If the red line strayed above the blue line I knew I had to run for a few days at a lower intensity so that I wasn’t ramping up the intensity too fast. All I had to do was keep checking this graph, adjust training accordingly, and hey-presto; injury avoided!

This is just one example of how becoming a data driven athlete has helped me improve, but, there are ways that data will assist in any sport. It might be fairly complex, such as a kinematic analysis of your tackling in football or it could be more simple, like recording how far you run each week, but either way the point is that data can help all athletes and generally speaking a good ethos to follow is that more data is better.

This is essentially what Crossbridge is all about. At the moment there is no way for an athlete to measure and record sweat rates and monitor thermoregulatory efficiency over time. Crossbridge developing this world-first wearable, real-time sweat rate monitor has great implications for the world of elite sport and, personally, I’m very excited to get hold of of a KuduSmart®, go for a run and see how good I am at sweating.