April 22nd saw 40,000 runners hit the streets on London for (in my opinion) the greatest marathon in the world. This year was particularly noteworthy as it was the hottest on record. It’s the 3rd year in a row I’ve run in London, but each year has been very different. This year the heat was all anyone was talking about. When the high humidity and lack of clouds are taken into account it resulted in a roughly 3.5% - 5% performance decrement for the runners. Part of the reason it proved such an issue for many of the runners was because the weeks leading up to the race were cold, and then it suddenly got hot in the few days beforehand. This means that most runners were not acclimated to running in the heat, and the slow finishing time reflected this.

Credit to the organisers, they had increased the number of water stations on the route and this went a long way to keeping the runners cool enough. While we’re on the subject of the organisers it’s worth mentioning they are a key reason that I consider London to be the best race around. The whole London experience is smooth and well organised; free public transport for runners on race day, an efficient starting system and flawless bag collection at the end all contribute to a fantastic race day experience.

I was thankful for every little bit of shade

For me the race was a success, but not surprising. The combination of tracking all my training and having done 12 marathons over the last 5 years means I was confident of the time I could run and was able to formulate a race plan appropriate for the conditions. And, although I did slow down a little in the last 8km I put this down to a “motivational bonk” upon realising I would not break the 2:30 mark. If you’re really keen to know what was going through my head during the race I’ve provided a mile-by-mile analysis of my race below*.

At the end of it all a finishing time of 2:32:50 was a good pb and 46th place (excluding the elite runners) meant I was able to cross the line, recover, get changed and be looking fresh before any of my friends showed up in the finishing area. In reality it doesn’t matter what speed you run, the important thing is making it look easy. 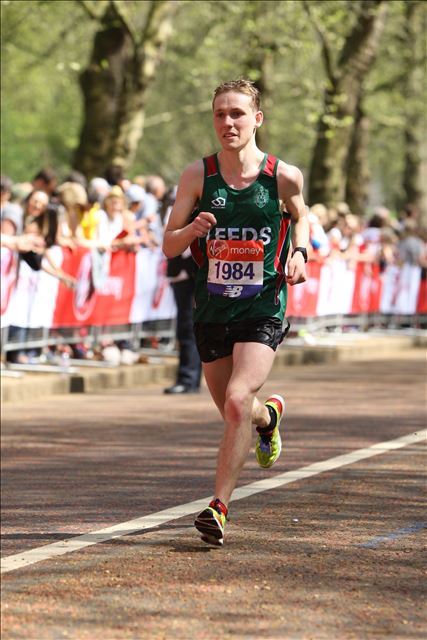 Ok so "making it look easy" might have been an exaggeration

*here’s how it happened: On the start line I made sure to have a bottle of water that I was consistently pouring over myself. It was important to start the race as cool as possible. I made sure not to do anything as silly as “warm up”. Miles 1-3 were a too slow. I always race according to my heart rate, without my watch even showing me what pace I’m running. Unfortunately the heat meant my HR was higher than expected so it was only towards the end of mile 3 when I decided that I could push the HR by an extra 3bpm. Mile 4 was pretty dull, I just made sure to keep my HR at 170bpm. Mile 5 was enjoyable because I saw a friend in the crowd cheering me on. Thanks Catrin! The same happened at mile 6 with my family – thanks to you guys too. It was then a fairly consistent trot up to Tower Bridge, the halfway mark. This is probably my favourite part of the race. The volume of the support is truly astounding.

At halfway I saw that I was roughly 50 seconds slower than 2:30 pace. Still feeling good I decided to up the pace a little to see if I could regain this time and go sub-2:30. Miles 13-20 were a steady gain on the time I had lost in the first 3 miles. To my surprise I was able to keep a consistent HR during this effort. I expected it to rise by around 1bpm per km. However, I stayed at a steady 171bpm. By mile 20 the number of people in front of me had reduced to around 50. This meant that I did not have runners in front of me to draft off. Up until this point I had a significant aerodynamic advantage because I was moving up through the pack. For the last 6 miles I was essentially alone, which provides both an aerodynamic and motivational challenge. It was around mile 21 when I realised I would not be able to go sub-2:30 so I opted for easing off the effort, down to 169bpm. This meant a slight reduction in pace for the last 5 miles, but I decided it was better to slow down and enjoy the last few miles rather than put everything in an risk a serious explosion.

At every water station I took a bottle of water to pour over myself to assist cooling. As usual (for me) I didn’t eat or drink anything during the race and made sure I ran as close to the blue line as possible, although I did deviate from the shortest course if I decided it was better to draft off another runner or run in the shade. Overall it was pleasing because I a) executed my plan fairly well, and b) produced a good result from the training that lead up to London.